Posted on February 21, 2016 by londonrdstationpartnership 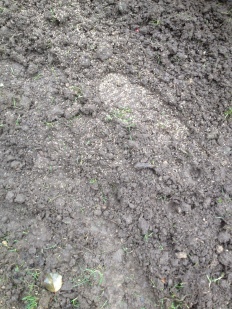 It doesn’t look like much … and it may not come into its full beauty until next year, but it’s a start. This afternoon, there were eight of us to sow large quantities of wildflower seed along half the east side of Brighton Greenway. The path got a bit muddy and the soil wasn’t exactly the ‘fine tilth’ we aimed for, but we certainly spread the seed with good heart and wished it well. You can find the list of species sown  at the end of the updated Project Plan (also stored under Documents above).

Some specific species were sown in small trenches while grasses and other flower seeds were broadcast across the whole area. We noted carefully what was sown where and we’ll load up a ‘clean’ version of our sowing map once it’s been prepared. I know exactly where I sowed my row of dog violets and another row of primroses; I ended up feeling very protective about them. We also sowed flower seed for shady areas by the steps leading up the New England bridge embankment.

As with all wildflower sowings, we now have to leave it up to nature and hope that couch grass doesn’t bully the seed into meek submission. For the moment, there’s plenty of moisture in the soil; too much in places. But who knows what kind of year it’s going to be … will the soil be drying out in April, like it has done in some previous years?

And of course the pigeons and blackbirds got in quickly to peck at surface seed but there should be enough there for that not to be a problem. There were also plenty of dogs up on the Greenway this afternoon and we’d ask dog walkers to discourage their dogs from running across the newly planted areas and digging in the dug-over soil. We hope to see the seedlings coming through in mid-spring.

And after we’d sown the seed, we had the usual round of wiping out graffiti and clearing litter and chatting with passers-by. Today’s litter haul included some intriguing items: a swimming costume, a DJ’s disc box and a small supermarket drag-able basket … hmm, how did they come to be there?