Posted on May 29, 2017 by londonrdstationpartnership

We’re well into the growing year of 2017 with very warm temperatures now in May, but thankfully some rain today. It’s been hard to keep up with all the things we’ve been doing up on Brighton Greenway, but in an effort to catch up, here’s an update.

It was a rather miserable day, I remember, but enlivened by a visit from Pete West – founder member of Friends of Brighton Greenway, one of our ward Councillors and back in March, still Mayor of Brighton & Hove – together with his son and the official mayor’s ‘minder’. Pete and his entourage arrived in the official mayoral vehicle complete with shiny new litter pickers. They were heading off afterwards to do some more litter-picking on Brighton beach. We cleared a lot of litter and planted our baby trees on the Isetta strip. 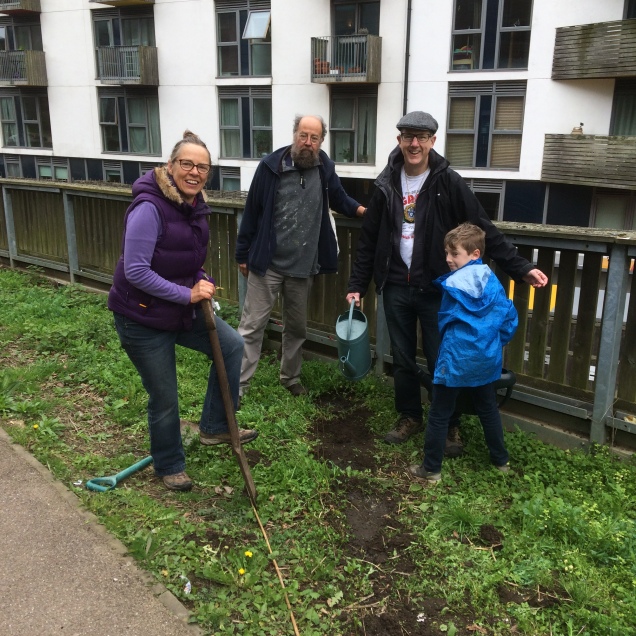 Later, we planted polyanthus with one of our youngest visitors. We also had 24 more young trees donated by Brighton’s specialist community tree nursery, the aptly named Special Branch: twelve each of spindle and guelder rose, which we’ve been planning to plant for some time. These have been planted wherever there is space, along both west and east sides. And we added some wildflower seedlings – foxgloves, red campion and ox-eye daisies – to the ornamental beds by the fossil seating. 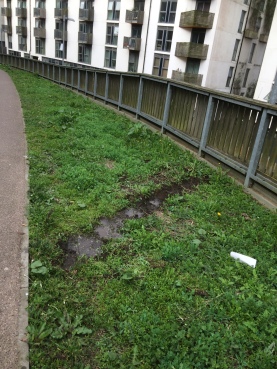 With cowslips out and the cornus showing red stems and lime green leaves, we dug over the bed which had been cleared by volunteers from Network Rail back in March and sow some more wildflower seeds from GrowWild. It had only taken a month for nettles to come back, so it needed quite a bit of work. We wanted to enhance the view from the central fossil bench and allow Jon Mill’s lovely ‘tool fence’ to be seen, as well as the vista over Vantage Point towards Round Hill.

The team from Network Rail, Spring 2017

Our biggest challenge since then has been drought: this was one of the driest Aprils on record. As we have to water using watering cans carried from Isetta Square, getting enough moisture in the ground if it doesn’t rain is challenging. Thank goodness May has seen some pretty solid downpours.