We are getting started again with our workdays on Brighton Greenway. We plan to meet on the first Sunday of each month. Look forward to seeing you!

SUNDAY 9th February 2020 – cancelled due to storm Chiara (or was it Dennis?)

A brief work session before AGM: litter picking and clearing overgrowth 1) at the New England bridge and b) by the Boston St entrance. We cleared some of the dying vegetation in the raised beds and sowed some remaining GrowWild seeds in the patch denuded by scaffolding etc. just opposite Boston St entrance. We’ll see what happens!

A solid work session cutting back the very thick nettles, thistles, dock etc. on the ‘strip’ above Isetta Square and bagging up. We managed to get most of it done, but top quarter near Stroudley Rd is still rather overgrown. We’ve called for Cityparks’ help in strimming and collecting green waste. And lots of litter-picking …

We started cutting back nettles towards the front of the Isetta ‘strip’ but hard work with only shears and secateurs … Litter picking and checking on our wildflower audit.

Strange hot-cold-wet weather meant that we didn’t do a lot of active things on Brighton Greenway: usual litter-picking, tidying up plants and updating our wildflower audit. We didn’t cut back nettles, thistles and dock – waiting for next session to do this.

Exciting session as we built two raised beds with Stroudley Rd residents and planted up one of them. And James completed a wildflower audit.

A good session with lots of litter-picking and clearing. We also did a rough audit of wild flowers – and a coal-tit was seen nesting above one of the nesting boxes: a first!

A very, very cold wind curtailed our session, but we managed a good crop of litter.

A fantastic turn-out for the new year = 15 volunteers turned up. 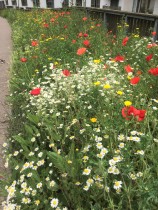 Join us for an informal picnic 1-2pm … just bring food and drink to share, and something to sit on. 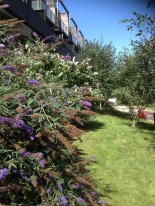 We cleared the flower ‘strip’, cut back vegetation and made the edges tidy around the fossil benches, cleaned tagging from ‘tools’, train and lamp-posts, picked up a lot of litter and cleared up wet leaves from the embankment steps.

We completed two projects: bulb planting towards Stroudley Road, and wildflower seeding in two 2x2m squares towards New England bridge. We planted corncockle seedlings along the east wall. We also did a general clear up and cut back the collapsed vines.

We cleared rubbish and cut back the shrubs (buddleja and cornus) which were growing over the path.

We cut back the prickly shrubs

around the seating and cut back brambles, preserving a metre-wide wildlife corridor.

We cut back the overgrowth

on the ornamental vines

We dug up nettles, cut back shrub overgrowth and cleared brambles

Our first session: we cut back the shrubs and brambles that had completely over-run the fence.